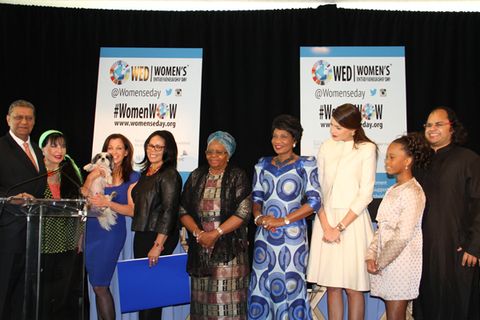 The first Women’s Entrepreneurship Day was packed with girl power, practical advice and a killer soundtrack.

Nov. 19 is International Men’s Day. It’s also World Toilet Day. But that didn’t stop entrepreneur and animal-rescue advocate Wendy Diamond from proclaiming it Women’s Entrepreneurship Day, with a little help from both Governor Andrew Cuomo and New York City Mayor Bill de Blasio, who made it official with a proclamation. “There’s World Turtle Day, there’s Bubble Bath Day, there’s every kind of day,” said Ms. Diamond in her opening speech. “But there was no day to empower, support and celebrate women. So I created Women’s Entrepreneurship Day.”

The lightbulb moment for Ms. Diamond came during a vacation in Honduras, where she was introduced to the Adelante Foundation, which gives $150-dollar microcredits to women to help them create their own businesses, provide for their families, and educate their children. “When I came back, I knew I wanted to help,” said Ms. Diamond.

In honor of this new day, which has been adopted by 144 countries, Ms. Diamond hosted a daylong girl power event at the United Nations. The event started off with PricewaterhouseCoopers Charitable Foundation president Shannon Schuyler on the traits that make up a successful entrepreneur: they’re their own biggest cheerleaders, aren’t concerned about the lack of support from others, and aren’t afraid of failure. “Most entrepreneurs fail several times and they are ok with that, because they know it will lead to something better,” she added.

Later in the day, Mama Sara Obama (President Obama’s grandmother) recalled how she had “graduated from grade zero” because women were not allowed to get an education in her home country of Kenya when she was growing up, and how she made it a point that all her children received education, even if that meant taking Barack Obama Senior to a school six miles away on a bicycle every single day. Even today, at 94, she is still ]helping build schools in Kenya.

Even later, Tamara Mellon confessed what she would’ve liked when she was 27 and just starting out with Jimmy Choo: “Not be so afraid to speak up and ask for help,” she said. SHE Innovates founder Scharpf spoke about female support. “Try to instigate as many women as you know to become investors,” she said. “Sixty percent of small businesses in this country are run by women, but only three percent of venture capital is run by women. There’s a disconnect.” Women are more likely to support women entrepreneurs, she said, because they see the world through a similar lens.

That was the day’s underlying message: women entrepreneurs need to support each other, be it as investors, creators or customers. As Wendy Diamond put it, “women need to have each other’s backs, not stab each other’s backs.” So remember that for any future November 19th from now on—and support a female entrepreneur.