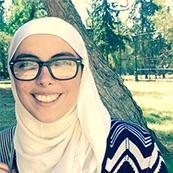 Woman of the day

The conflict in Syria right now is escalating.It was announced today that President Obama plans to deploy  special forces to the country in attempt to advise the opposition as they continue their fight against the Islamic State.

Even in a country torn apart by fighting and Women’s Entrepreneurship Day’s World Ambassador for Syria, May Massijeh, is inspiring and empowering women in the Middle East and around the world! This trailblazer is the cofounder and creative content creator of Daraty.

Daraty is an educational game aimed at children seven and older. This game aims to introduce children to engineering through a fun and interactive platform.

Through her creative eye she is carving a path for other female entrepreneurs in the Middle East and around the world in a time of conflict. Her work is truly an inspiration!