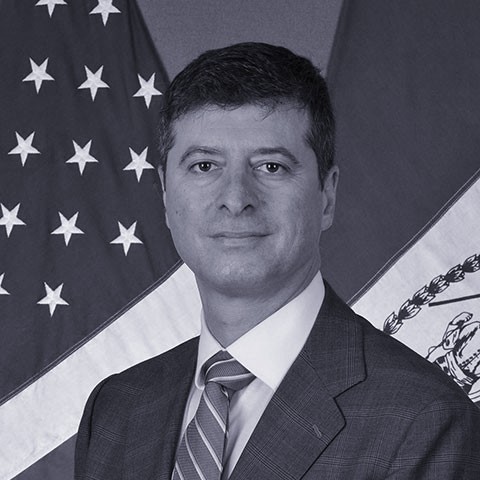 Prior to joining the Adams Administration, Edward was the CEO and founder of One & Only Holdings and One & Only Realty, where he specialized in international corporate and real estate law, private equity investment and joint ventures, as well as real estate investment. Edward’s experience in navigating international markets led him to be named one of New York City’s 10 most influential figures in real estate. He aims to bring the same tenacity to the Commission for International Affairs, and to help Mayor Adams reestablish New York City as the capital of the world.

In addition to a remarkable career in the private-sector, Edward has also been an integral member of the philanthropic community.

In 2016, Edward joined the Board of Overseers of NYU, where he established the Mermelstein Family Scholarship. He is also a Board Member of JDC, a leading global Jewish humanitarian organization, which works in 70 countries to lift lives and strengthen communities.

He also served as the USA Director of the Link of Times Foundation, where one of the projects he helped facilitate was organizing the return of the Danilov Bells to the Russian Orthodox Church in 2008 from Harvard University.

Edward sits as Chairman Emeritus of COJECO (Council of Jewish Émigré Community Organizations), where he gave guidance to help facilitate the integration of Russian-speaking Jews into the greater American Jewish community while preserving their cultural heritage.

From 2018 until 2021 he served as President of Zaka International Rescue and Recovery, a UN-recognized humanitarian volunteer organization that provides a rapid response to mass casualty disasters across the world. To date, ZAKA has saved thousands of lives—and honored those who couldn’t be saved with dignity in death.

Fluent in English and Russian, Edward emigrated to the U.S. in 1976 as a refugee from Ukraine. He holds a BA from NYU and a JD from Western Michigan Law School. Edward lives in NYC with his wife, Rose, a Broadway producer, and six-time Tony award winner, and his two sons.